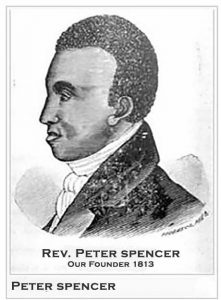 Rejoicing triumphantly in the fervent compassionate loving kindness and the abundant grace of The Holy Father, God, The Holy Son, Jesus and The Holy Spirit, during this Founder’s Day commemoration of the devout Christian leader, The Right Reverend Peter Spencer, all of God’s children can shout “Let the Lord be Magnified!” in this historic observance on Sunday, August 27, 2006.
For the Lord is truly great and greatly to be praised. We love the Lord, because he hath heard the voice of The Right Reverend Peter Spencer calling prayerfully “Deliver me from the oppression of man: so will I keep thy precepts.” (Psalm 119:134) Yes, Almighty God made His face to shine upon his servant Bishop Spencer for sixty-one years, as the founder of the First African American Methodist denomination on September 18, 1813 in Wilmington, Delaware.

It is significant to acknowledge that Father Peter Spencer contributed to the realization of life, liberty, and the pursuit of happiness for African Americans and all God’s children. He maintained the struggle for human liberation.
Bishop Reese C. Scott of The African Union Methodist Protestant Church in 1966 recognized that the first Bishop, Peter Spencer protested for human equality and social justice before The Reverend Doctor Martin Luther King, Jr., did.

Indeed, Bishop Spencer was among the architects of The African American struggle, sharing honorable distinction with Bishop Richard Allen of the African Methodist Episcopal Church, and Bishop James Vaick of The African Methodist Zion Church, and countless others. Bishop Peter Spencer taught that African Americans could never be free and autonomous without quality education, leadership, economic stability, self-determination, respect, and unity of will, direction and purpose through Jesus Christ. He also stressed the need for African Americans to show pride in and love for their families, to properly train their children, and to avoid doing violence to one another.

Those same mentioned values and standards espoused by the Founding Father are still essential for today’s society and tomorrow’s communities to be truly democratic and free, as embodied in The Constitution and The Declaration of Independence. In connection with this need for continuing struggle, Bishop Spencer demonstrated indomitable leadership as a champion of religious freedom.

He was a pioneer in bringing about African American religious freedom. Bishop Spencer was persuaded that African Americans could worship God without restriction, and that was why he was instrumental in founding The Union Church of Americans.

Let us review the highlights of Father Spencer’s life as recorded herein for He:

In memory of Bishop Peter Spencer, a hymn was sung for decades after his death as follows: Oh, where is Father Spencer I wonder where he’s gone?

There are no upcoming events at this time.