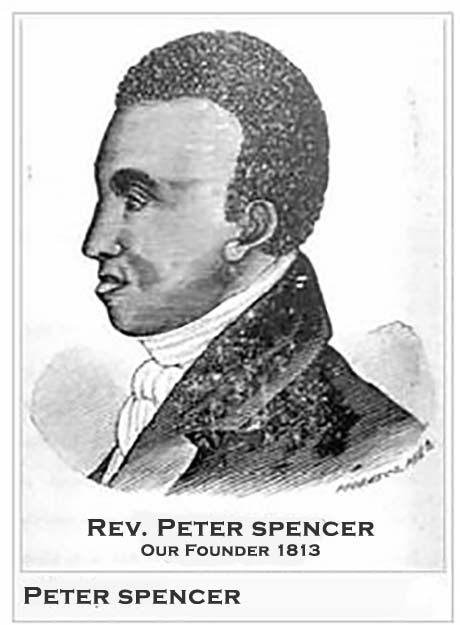 The most notable name in the history of the Black Church in the State of Delaware is that of Peter Spencer. He was born in Kent County, Maryland. After forming Ezion Church, he and William Anderson founded in 1813, the “Union Church of African Members,” the first Church in the United States originally organized by, and afterwards wholly under the care of the Negro race. The reasons given by them for separating from The Ezion Church, which do equal
credit to their hearts and to their heads were plainly enough ecclesiastical echoes of the old doctrines for which the “embattled farmers stood and fired the shot heard round the world.” Their church, built in 1813, was rebuilt in 1827, and enlarged in 1842. A conference of the new denomination elected their founder, The Reverend Peter Spencer and Reverend Isaac Barney, Bishops of the States of New Jersey, Delaware and Pennsylvania. Bishop Spencer died in 1843 and the “Delaware Gazette” noticing his death, spoke of his character and qualifications in terms of highest respect, not to say of his eulogy. After his death, a dispute arising over the election of his successor, Bishop Isaac Barney in 1851, and thirty Churches withdrew and formed the “Union American Methodist Episcopal Church.”

We deem it expedient to annex to our Book of Discipline a brief historical sketch on the rise and progress of The African Union Methodist Protestant Church of The United States of America or elsewhere.

The African Union Church was formerly a member of Methodist Episcopal Church, of Wilmington, Delaware, of African descent, as early as A.D. 1805. And as to Methodist Episcopal Church thought it proper to deny us the religious privileges guaranteed to us by the word of God and His liberal gospel, we did quietly withdraw from said connection, and erected a house of worship where we could worship God according to the enlightened dictates of our
consciences, and for the exercise of our spiritual gifts; and in the prosecution of our undertaking, we experienced from the hand of our Lord, a peculiar manifestation of Divine favor, and through our own exertion and the liberality of all the religious denominations, we were able to build a house of worship the same year.

Then we thought we could have the rule of our church so as to make our own rules and laws for ourselves, only we knew we must help to support the preachers that were stationed in Wilmington to preach at both churches, which we were willing to do. We then thought we had power to refuse any we thought not proper persons to preach to us, but the station minister that was in Wilmington to preach told us plainly that we had no say, and he must be the entire judge of all. Then that body of us who built the Meeting House could not see our way clear to give up all say and for that reason our minister said we had violated the law of Discipline, and turned out all the trustees and class leaders and never allowed a hearing. This was done December, 1812, and after many sorrowful times, and among all the rest a small party, the most of them strangers, that knew but little of the cause for which we build a house, told the Elder they were willing to be governed by the Discipline and do what he told them, and then things went on worse, till at length we were brought before the Court, which cost us much loss of money. We then saw if we did not let that Church go, we might look for nothing but lawing, unless we would comply and let the preacher do as he pleased. For the sake of peace and love, and nothing but that, we soberly came away and we mean that all shall see that all we want is peace and love and nothing else. Better is a morsel with contentment than a house full where there is contention. What is here written is true, and may the Lord lead us by His counsel and then bring us to glory in the way that the influences of which we were surrounded compelled us to pursue the course, for we had not one to direct us but the Lord, and to Him be glory forever and ever.

Having purchased another place of worship pursuant to public notice, the members met at their Church, known and distinguished by the name of the Union Church, on the 7th day of September, 1813, for the purpose of electing Ruling Elders to take charge of the spiritual affairs of the Church. They did then there elect suitable brethren for that purpose by plurality were and on the 14th day of September, A.D. 1813, the said Elders met and did set apart WILLIAM ANDERSON and PETER SPENCER to be their preachers and to perform all of the religious services in said Union Church, proper for Gospel Ministries to do. This body of Christians, having experienced severe trials in order to advance the interests of the cause of the Blessed Redeemer and desirous of being an independent religious body of Christians, to be known by the name of The African Union Church, and agreeable to the laws of The State of Delaware, they became a body politic, and governed by the articles of the association in conformity in the act of incorporation.